In many cases, contractions are a necessary component of everyday life. They may be used in spoken language and informal writing to express an idea in less time or as a fast method to make a point. In formal writing, however, the apostrophe is typically used to indicate contractions, such as: I’m; we’re; and they’re.

A contraction is a word that has been shortened by removing one or more letters. Contractions are commonly used in spoken English and sometimes in formal writing, such as business letters. They are considered informal when they are used in everyday speech, such as in casual conversation and writing on the Internet.

A contraction is a shortened form of two or more words that sound as if they are written as one word. From the earliest days, English has used contractions. Contractions are appropriate in some formal writing situations.

What are Informal Contractions?

Informal contractions are shortened forms of words or phrases that are used in everyday speech. They are not considered to be part of standard English and are usually not found in formal writing.

Informal contractions are a feature of spoken English and don’t always translate well into writing. Using them in formal documents is probably not advisable as you want to be as formal as possible for these types of things. One of the difficulties I find with informal contractions is that we almost need to see it or hear it in order to understand what’s been said.

We don’t use apostrophe (‘) in all the informal contractions. For example,

Gotta (have got a)

Here are 50 example sentences of contractions: 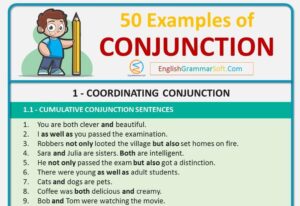 50 Conjunction Sentences We have narrated conjunction sentences. You will find here examples of all types of conjunctions. Let’s start! 1 – Coordinating Conjunction:- 1.1… A preposition is used to show the relation of one thing to another. It connects a noun or a pronoun with a verb, adjective, pronoun…