The words which tell something mere or describe or qualify a noun or a pronoun are called “the adjectives”.

They may tell the quality or quantity of the noun or pronoun for which they are used. It is used before a noun and after linking verb.

For example, beautiful, tall, wise, poor, fine, large etc. They all are showing some quality or make prominent of something or some person.

There are three degrees of adjectives.

To make degree of adjective we use ‘er’ for second and ‘est’ for third degree.

The rule is that when the word is a pronoun or comprised of two or more syllables, we use more for the second degree and most for the third degree.

The adjectives which end on y, ow, er, and comprise upon two-syllable, for them, we usually add ‘er’, ‘est’.

With the above adjectives, we can use ‘more’ in second degree and ‘most’ in third degree.

Do not use ‘more’ when the adjective is present with ‘er’.

For comparison, use ‘than’ instead of ‘from’.

With the adjectives, senior, junior, inferior, superior, prefer, or prior, we use ‘to’.

In the comparative degree of adjectives, sometimes we use ‘the’ in order to specify something.

‘Much’ speaks quantity while ‘many’ denotes number.

Pair of words in the use of adjectives

Besides (by the side)  :  Beside (in addition, further, more)

Always use ‘to’ after elder or eldest.

Following are different types of adjectives.

It is a prenominal adjective that expresses possession. A possessive adjective modifies a noun by telling whom it belongs to. It also answers the question “whose”.

These are the possessive adjectives

Use of possessive adjective in sentences

An adjective that is generally not capable of being intensified or captured. This adjective has not any comparative or superlative degree.

Adjective showing the kind of quality of nouns or pronouns is called adjective of quality.

Use of adjective of quality in sentences

The adjectives which show the quantity of a noun are called adjectives of quantity.

These are adjective of quantity

Much, enough, half, little.

Numeral adjectives are those that express numbers of the noun or pronoun. It also shows how many persons or things are meant.

Sometimes adjectives of number are not precise. For example, a few days, many days.

The adjective which represent the shape of pronoun is called an adjective of shape.

The adjective which shows the color of noun or pronoun is called adjective of color.

These are the adjectives which describe another person or thing in origin.

Use of adjective of origin in sentences

The adjectives which show that which and what thing is meant are called demonstrative adjectives.

This, that, these, those etc.

If this, that, those give an indication of some nouns, they are called demonstrative pronouns.

In order to better understand the difference between demonstrative pronouns and demonstrative adjectives, some sentences are explained in the given table.

Indefinite adjectives are those adjectives which point out the nouns. They often tell “how many” or “how much” of something.

Use of indefinite adjectives in sentences

The adjectives which are used with nouns to ask questions are called interrogative adjectives.

Use of interrogative adjective in sentences

This adjective is either used on subject or object before noun. It can also be used as complement.

These are the adjectives which refer to each one of a number are called distributive adjectives. 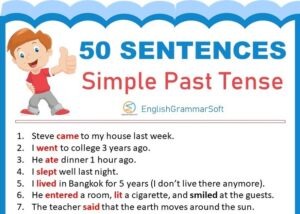 The simple past tense is used to express an action or situations which occurred in the past and are finished. Generally, it is used to… Distributive adjective is one that is referring to each of the members of a group individually and separately. This means each individual element is separate…