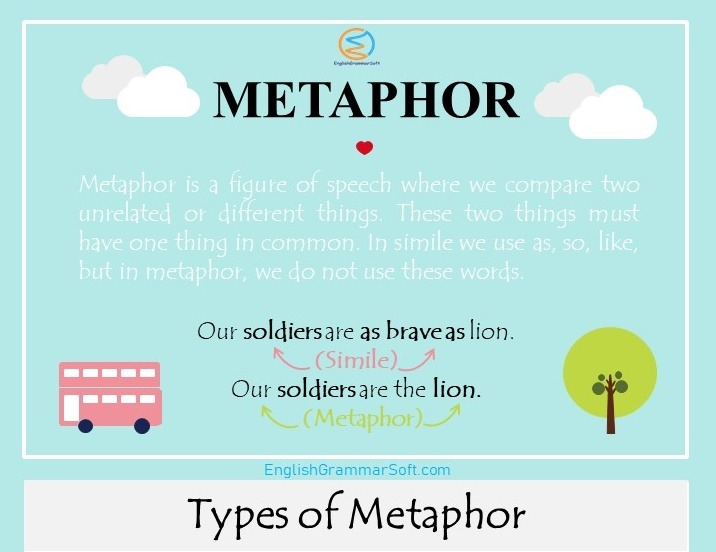 Metaphor is a figure of speech where we compare two unrelated or different things. These two things must have one thing in common. In simile we use as, so, like, but in metaphor, we do not use these words.

What is a metaphor?

A metaphor is a figure of speech that directly compares two different things without any use of “like” or “as.” It can be a word, phrase, sentence, or paragraph. A metaphor can make an idea easier to understand by comparing it with something more familiar and concrete.

Metaphors are often used in literature and poetry because they help paint a picture for the reader’s imagination. They have been used throughout history as well as today to help us better understand abstract concepts like love, death, beauty, and courage.

We cannot avoid metaphors. Here are examples of metaphors,

What does the metaphor Butterflies in stomach mean? It means someone is feeling nervous.

Example: Tom got butterflies in his stomach before making the speech.

Metaphors are a powerful way to express ideas. They can even be used to help describe complex scientific or mathematical theories, which can otherwise seem difficult to understand and follow.

Here are some examples of metaphors that have been used in various fields of study and see how they illustrate the topic at hand.

In mathematics: “Every time you take a step forward on your journey through infinity; you go around one full circle.”

In physics: “To throw an apple off the top of a building with enough force so it hits the ground is like throwing a ball up in the air.”

In chemistry: “A molecule is like two people holding hands.”

In metaphor, quality is missing. Metaphors are indirect comparisons.

There are many types of metaphors to point the metaphorical pictures. Summary is;

The most basic type of metaphor is the primary metaphor. Primary metaphors are used in daily life speech and studies. For example,

In this metaphor, two different things are compared, so the meaning is very clear.

Grouping of primary metaphors is called complex metaphors. In these metaphors, we compare two or more things. For example,

This sentence is composed of two metaphors (i) eyes caught the melody, and (ii) eyes reflected the melody in radiance.

Mixed metaphors are distant for comedy. They intentionally combine two metaphors that are inappropriate/silly.

After getting this job, I am flying high and into the valleys of happiness.

A dead metaphor is a metaphor that has the spellbound fundamental image of its meaning due to repetitive and popular use.

The thread flew through the eye of the needle.

Creative metaphor is an original difference that calls plan to itself as a figure of speech.

She is a shining star.

The extended metaphor is a comparison between two different things that carry throughout the cycle of sentences in a paragraph of a poem.

Hope is the thing with feathers that perches in the soul,

and sings the tune — what the words,

and never stops at all,

In conceptual metaphor one though is implicit in conditions of a different.

An implied metaphor is a metaphor that compares two different things without bringing up one of them.

My dad is my rock.

A root metaphor is directly interrelated to people, culture, characteristics, and perception of life.

Life is a journey.

A visual metaphor is an image that the viewer is meant to understand as a symbol for something else. It is also the representation of a person, place, thing, or thought by a visual image.

Organizational metaphor is a comparison used to define the fundamental aspects of an institute and describe its method of operation.

Submerged metaphor is a type of metaphor in which one of the terms is indirect fairly than acknowledged explicitly.

“I am Titanium” by David Guetta & Sia Tribute

“The Sun Rising” by John Donne

She is all states, and all prices, I
Nothing else is. Prices do but play us,
Compared to this,
All honour’s mimic, all wealth alchemy.

“The Road Not Taken” by Robert Forest

Two roads diverged in a yellow wood,
And sorry I could not travel both
An be one traveler, long I stood
And looked down one as far as I could
To where it bent in the undergrowth,

Metaphors are used in many types of poetry.

Metaphors are used in all types of literature. Metaphor poem is composed of complex images and feelings to readers. These are some examples of metaphorical literature.

“Invoke thy aid to my adventurous song,
That with no middle flight intends to soar.
Above the Aonian Mount”

This is a good metaphorical by John Milton from his book Paradise Lost wherein he has compared his poetry to love.

“The Sun Rising” by John Donne

“Busy old fool, unruly sun,
Why dost thou thus,
Through windows, and through
curtains call on us”

A poem by John Donne. He is a metaphysical poet and famous for his use of metaphors.

“But soft, what light through yonder window breaks?
It is the east, and Juliet is the sun”

In this paragraph, William Shakespeare used metaphors to describe peoples in an unexpected way.

“When Thou Hath Done” by John Donne

“When thou weep’st, unkindly kind,
My life’s blood doth decay
When a tear falls,
That thou false which it bore,
Here lies a she-sun and a he-moon there,
All woman shall adore us,
and some men.”

This stanza gives a special character to Donne’s metaphysical poetry.

“The Storm” by Kate Chopin
“Her mouth was a fountain of delight.”

From the above explanations, we can easily infer the function and purpose of metaphors, both in our daily speech and literature.

Metaphors are a way of thinking, allows listeners and readers to understand the idea or thought. And, even though metaphors are amplification they are only amplified to paint a clear picture.