What is Free Verse?

Free verse is a type of poetry that doesn’t use rhyme or regular meter. It has no set form, but it can have a pattern in the way words are used. Lines usually follow one another without any punctuation to mark the end of one line and start of the next. The most common free verse forms are blank verse, which is unrhymed iambic pentameter; as well as prose poems, which break away from traditional metrical patterns and focus on narrative structure instead.
Free Verse Poetry: What Is It And How Is It Different From Other Types Of Poetry?

Free verse is a type of poetry that doesn’t have set meters or rhyme schemes. Free verse generally has a more natural flow and less structure than traditional poetry, making it easier to read for some people. It also often uses slant rhyme, which is where the vowel sounds in two words are similar but not exactly alike.

It is originated from the French verse libre. It was commonly used in the 20th century. Walt Whitman was the father of this term.

Free verse is opposite to formal verse which is without meter and rhyme scheme. It is a poetic form that does not have a regular meter and the length of its lines is also not regular. ‘Free verse’ follows the rhythm of natural speech and counterpoint of stressed and unstressed syllables.

‘Free verse’ is the most commonly used form in English poetry that does not follow a prescribed form and is characterized by irregularity in the length of lines and the absence of metrical form. In the 20th century, many poets including Ezra Pound, T.S. Eliot, D.H. Lawrence, and William Carlos Williams used this form in poetry.

Let us go then, you and I,
When the evening is spread out against the sky
Like a patient etherized upon a table;
Let us go, through certain half-deserted streets,
The muttering retreats.

The above lines are irregular in nature and no meter and syllables with rhythm have been used.

The fog comes
on little cat feet
It sits looking over harbor and city
on silent haunches and then moves on.

Example 3 – “After the Sea-Ship” by Walt Whitman

After the sea-ship, after the whistling winds,
After the white-grey sails taut to their spas and ropes,
Below, a myriad myriad waves hastening, lifting up their necks,
Tending in ceaseless flow toward the track of the ship,
Waves of the ocean bubbling and gurgling, blithely prying,
Waves, undulating waves, liquid, uneven emulous waves,
Toward that whirling current, laughing and buoyant, with curves,
Where the great vessel sailing and tacking displaces the surface

Ex. No.4. The Fox by Charles Tomlinson

The wind
had scarped it into a Pennine wholly of snow, and
where did the hill go now?
There was no way round:
I drew booted legs
Back out of it, took to my tracks again,
But already a million blown snow-motes were
Flowing and filling them in.

Ex. No. 5: Where the mind is without fear by Tagore

Where the mind is without fear and the head is held high
Where knowledge is free
Where the world has not been broken up into fragments by narrow
domestic walls
Where words come out from the depth of truth
Where tireless striving stretches its arms towards perfection
Where the clear stream of reason has not lost its way into the dreary
desert sand of dead  habit
Where the mind is led forward by thee into ever widening thought and
action
Into that heaven of freedom, my father let my country awake

“Things men have made with wakened hands and put soft life into
are awake through years with transferred touch, and go on glowing
for long years
And for this reason, some old things are lovely
warm still with the life of forgotten men who made them”. 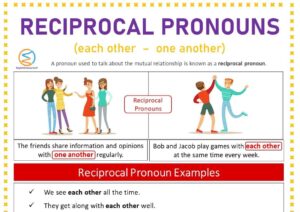 Reciprocal Pronouns A pronoun used to talk about the mutual relationship is known as a reciprocal pronoun. These kinds of pronouns are used to indicate… If you have learned the verb tenses, you will have also learned the future perfect tense. If not, then read this post. Here are future…