Past Continuous (Progressive) Tense refers to ongoing actions in the past. If we want to talk about some past action that is completed while another is still going on, we use the Past Continuous for the longer unfinished action and the simple past for the shorter completed action.

Past continuous or past progressive tense is used to describe past actions that have not been finished.

In past continuous tense, we use present participle. See the structure of affirmative, negative and interrogative sentences.

A young lady was traveling on the train. A man was standing near her who was chewing gum. A cute girl was also sitting opposite to her. The train was on its way to the destination in the morning. Some passengers were sleeping on their seats when we were having breakfast. 50 Example Sentences of Preposition Read also: Preposition Usage and Examples A message which is shorter in length is often called a note. I hang my coat behind the… 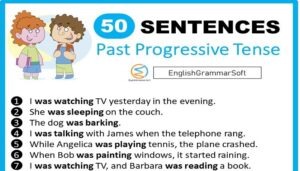 The Past Continuous tense or Past Progressive tense indicates continuing action, something that was happening, going on, at some point in the past. The actions… Interpersonal skills are the ability to work with other people in order to manage conflict, solve problems, and create solutions. These skills are vital for… Comma is the smallest punctuation mark that has the biggest effect. What is a comma? A comma is a mark showing the separation of different…