The past perfect tense is also used to create a time frame in the past. In other words, this tense can be used when you have a certain period in the past, and you want to explain what happened during that time frame.

Past perfect tense describes action completed before the past-moment we are talking about. This tense bears the same relation to the past time as the Present Perfect Tense does to now.

Past perfect tense is formed with the helping verb “had” and the past participle of a verb.

Subject + had + not + past participle

Had + subject + past participle ? 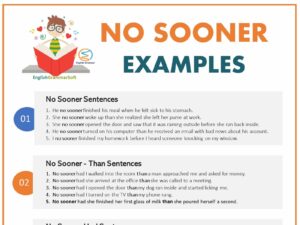 No sooner – than is a phrase that means “as soon as possible.” It’s often used in phrases like “no sooner than tomorrow” or “no… We have compiled 50 example sentences of abstract nouns for you. 50 Examples of Abstract Nouns Ability: Tom has the ability to run 10 miles…