It is a figure of speech in which the sound reflects the sense. It is the employment of words that imitate the sound or echo the sense. It creates a sound effect that mimics the description of words expressive and interesting. For example, dong, crackle, moo, pop, whizz, whoosh, zoom.

It is very common in verse and fairly common in prose and is found in many pieces of literature at all times.

He saw nothing and heard nothing but he could feel his heart pounding and then he heard the clack on stone and the leaping, dropping clicks of a small rock falling.

Ernest Hemingway, For Whom the Bell Tolls

In these lines, the cooing of the doves and the humming of the bees are examples of onomatopoeia.

“The moan of doves in immemorial elms
And murmuring of innumerable bees.”

In these lines, vowel sounds in the second line suggest the idea of loud thundering noise.

The whole passage is subtly onomatopoeic, the rhythm of the second line is a beautifully skillful evocation of the clickety-clack of wheels on rails.

When the train starts, and the passengers are settled
To fruit, periodicals and business letters
Their faces relax from grief into relief,
To the sleepy rhythm of a hundred hours

Pope’s obiter dictum that the ‘sound must seem an echo to the sense’ is profoundly true of poetry in general. The following lines from D.H. Lawrence’s poem “Snake illustrate the point”,

In the rhythm, motion and length of the lines and in the totality of the sound effects Lawrence has suggested very well the sinuous and slow progression of the reptile. The sound effects are, so to speak, visual as well as aural. 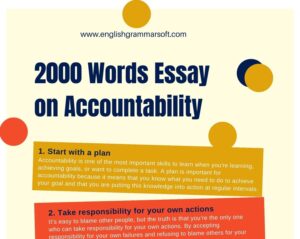 Accountability is a powerful tool to have in your life. It can help you achieve goals, overcome fears, and keep you on track for what…