A figure of speech that hints something unpleasant instead of stating it straightaway. When a thing, instead of being plainly stated, is suggested or implied merely, the effect is sometimes much greater.

For example when someone is to be said to examine what was reputed to be a very fine painting. He remarked, “what a splendid frame!”. The implication was that the painting was not good at all. So Innuendo is an art to manage the adverse remarks about something instead of direct accusations.

Example of Innuendo in Proverbs

1. “Some have been thought brave, because they were afraid to run away”.

People thought that those who remained in the battlefield were brave. In fact, those soldiers were so cowardly that they even could not run away in fear of life.

The above proverb indicates that people do not follow any rule & regulation in love and war.

And wretches hang that Jurymen may dine”

The implied meaning suggested in these lines is that dinner is more important to the Judges than life of the accused.

2) In “Twelfth Night” by Shakespeare

“By my life, this is my lady’s hand: these be her very C’s

Her U’s and her T’s: and thus makes she her great P’s.

3) In “Romeo and Juliet” by Shakespeare

“Yea”, quoth he, ‘dost thou fall upon thy face?

Thou wilt fall backward when thou hast more wit;

Wilt thou not, Jule? ‘and, by my holidame, 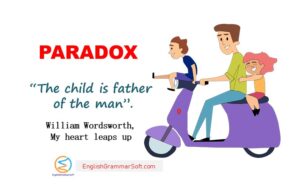 Paradox Definition A self-conflicting statement which at first appears to be confusing but later-on it became latent truth. It is often used to make the…

Common Nouns Worksheet Find the common nouns in the given sentences and write them down against each sentence. # Sentences Common Noun 1 He gathered… In this post, we are covering preposition, its types with examples and rules. Following points will be covered. What is a preposition? List of Prepositions… What is Subject Verb Agreement? Subject verb agreement is a structure where the verb is similar to the subject in terms of figure. There are…