These sentences do not have any object.

What are intransitive verbs?

An intransitive verb is a verb that does not take an object. This means that the action of the verb happens without anyone or anything else being involved.

We cannot use arrived with a direct object: We arrived them at the party at eight o’clock. This sentence is incorrect because arrived takes no object.

Some common intransitive verbs are listed below. This is by no means a complete list, but it will give you a good idea of the types of verbs that are intransitive.

The difference between transitive and intransitive verbs

An intransitive verb does not have a direct object. It expresses either no relation between subject and object or only a indirect relation. In other words, with intransitive verbs, you can’t answer the question “What did X do?” following the verb. For example, in the sentence “He ran quickly,” there is no direct relation between “He” and anything else in terms of action. You can ask “What did he do?” but you cannot answer this question with a direct object. Compare this to the previous sentence with a transitive verb: “He baked a cake.” Here you can answer the question “What did he bake?” with “Cake.”

How to use intransitive verbs

There is not a noun that follows an intransitive verb to receive the action of the verb. The verb always acts on the subject of the sentence. You can usually tell if a verb is intransitive if it uses the object indirectly or does not use at all.

Here are some examples of intransitive verbs:

Other mistakes with intransitive verbs include:

These verbs can be followed by an adjective, adverb, or prepositional phrase, but not a direct object. For example: 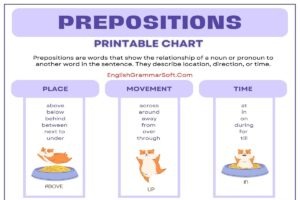 Hello There, If you are reading this, then it is obvious that you are interested in more information about “Printable Chart of Preposition”. What are…