Reflexive pronouns can be used in place of a direct object, but they are also used to emphasize that something is happening to or for someone or something else. For example: She hurt herself when she fell off her bike. See more sentences with reflexive pronouns below. 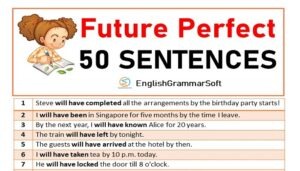 The future perfect tense is used to describe an event that is expected or planned to happen before another event in the future. Usually, this… Than is used for comparison while then is used for time as an adverb, noun or an adjective. Sentences with Then and Than These are…